Favorite Reads of the Last Decade 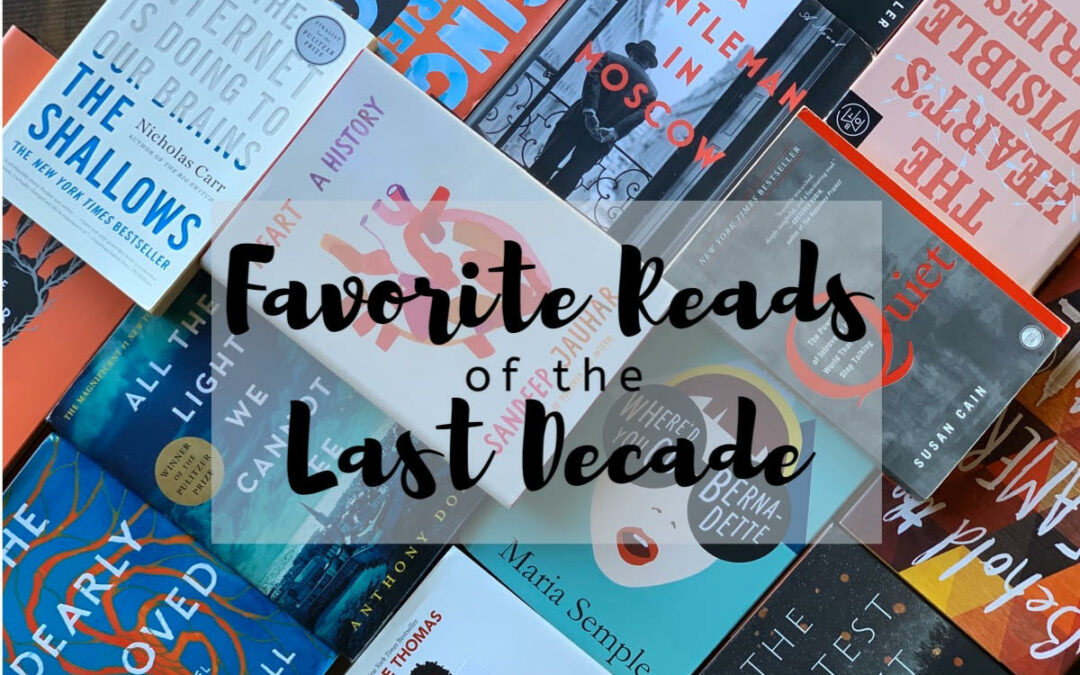 I was the child in trouble for sneaking off into corners of the house with my nose stuck in a book. I read to travel to new places in time and space. I read to learn about a topic, perspective or experience that doesn’t come naturally to me or is part of my own limited experience. I read to grow, to explore. And I read because damn it, I just love reading. This decade in reading has been broad (near as I can guess I’ve read around 350 books) and rich. I thought I would pull a few of my favorites from this decade of reading into a short list with a few thoughts on why I loved them.

I find Pachett books hit or miss maybe because I compare all of them to this adventure of a couple of female scientist in the jungle working on cutting edge research. The relationships are touching and complex. There are ethical dilemmas that make you think and it keeps an adventuresome pace.

The Shallows: What the Internet is Doing to Our Brains by Nicholas Carr (2011)

This book deeply influenced how I interact with social media, my phone and technology over all for the past decade. Carr argues (with scientific research) that while our brains are moldable (like plastic) they are not elastic (they can’t snap back in a previous state) and hence we need to be careful how we let the internet shape our brain towards short term stimulus. Definitely still a very relevant read.

Alone Together: Why We Expect More From Technology and Less from Each Other by Sherry Turkle (2011)

I read this one within months of The Shallows so it’s hard for me to think about them separately (they make great conversation partners) but this book also shaped how I chose to interacte with technology over the past decade. Turkle makes the argument that we settle for close approximations of actual relationship online and since they aren’t the real deal (rich, nuanced, IRL relationships) they leave us unsatisfied. Over the last decade as social media has grown, it’s helped me prioritized IRL friendships and not get sucked into the dissatisfaction of online social connection.

This book came along at exactly the right time, as I was reshaping my life to accomodate my new role of motherhood. Bernadette Fox was a renowned architect known for innovative and visionary work until she suddenly disappears from the public eye. Twenty years later she’s a mom in Seattle and a menace to her neighbors living a giant run down home. I love this funny, quirky book about meaning, creativity, motherhood and purpose.

Quiet: The Power of Introverts in a World that Can’t Stop Talking by Susan Cain (2013)

Quiet changed how I lead meetings and work with groups of people in my ministry…and later how I understood my role as a parent. Susan Cain offers an insightful critique of our culture that centers around and rewards extroversion. It also provided helpful personal illumination as to why certain situations left me feeling exhausted.

All the Light We Cannot See by Anthony Doerr (2014)

Historical fiction when done well can be imaginative and challenging, touching and sharp. Doerr pulls together the story of Marie-Laure a blind girl exiled from Paris to the walled town of Saint-Malo and Werner an orphan gifted with the ability to repair radios and all sorts of communication devices as they navigate WWII.

The Nightingale by Kristin Hannah (2015)

Kristin Hannah has such a strong sense of place in each of her books and the ability to create strong female characters like no one else. This was my first Kristin Hannah book and I found it exciting and compelling following two women and the decision they made during German occupied WWII. It also opened up a world to all her other books.

Homegoing is not just a good read, it’s an important book. Gyasi’s tale of two families spans centuries drawing a clear and poingant line from the American trans Atlantic slave trade to modern racism and how it shaped each generation’s inheritance, possibilities and dreams.

Count Alexander Rostov is sentenced to live out his life in the Metropol hotel across the street from the Kremlin and so begins a story that spans the decades of change in Russia and how Rostov lives his life confined to a building filled with interesting characters. I love a multi-decade story of relationship and politics, this one was a stand out.

This post-patriarchy sci-fi imagines a world in which women develop a power that suddenly gives them the opportunity to be the dominate sex. I think about the themes of this book frequently particularly the larger questions about whether power in anyone’s hands can be used sole for good, or if it ultimately corrupts?

Behold the Dreamers by Imbolo Mbue (2017)

A captivating look at immigration, class, race and the struggle to achieve the American Dream, Behold the Dreamers follows Jende, his wife and six year old son as they try to make a life in Harlem and become casualties of the decisions of the wealthy who brought about the 2008 crash. A great cross section of multiple issues and memorable characters.

One of my favorite books of all time, The Heart’s Invisible Furies is a coming of age story of Cyril Avery the adopted son of a wealthy and eccentric couple in 1940’s in Dublin. It’s a story of identity and meaning, self-discovery and love. I laughed, I cried, I absolutely will re-read this 500+ page tome in the next decade because it was a delight.

YA fiction often gets treated as a second tier of fiction, or fiction’s silly little cousin but Thomas’s debut novel shows that YA can tackle bold, relevant topics. The Hate U Give tackles the topic of police shooting in the black community and is one of the more important books released in the last year. Not only was it adapted into a film but it’s been assigned in schools and become an entry point for people to wrestle with issues of justice, race, police violence and class.

Beautiful and poignant, this novel evokes the magical realism of Toni Morrison’s Beloved as we follow thirteen year old Jojo as he wrestles with his identity and place in the world. His mom is unfocused, his father is being released from prison and his grandfather is aging. I was challenged by Jojo’s family while still rooting for him.

White Fragility: Why It’s so Hard for White People to Talk About Racism by Robin DiAngelo (2018)

I read this book with a reading group hosted by a black clergy woman in my area. I found reading it with other people helpful accountability to tackle the difficult topic of racism. It gave me helpful framing and language and actionable suggestions. This is a must read if you are committed to anti-racism work and an important read if you have ever said “but I’m not racist.”

A minister whose theological crisis spins in to a personal crisis, Silas House delivers a captivating story of faith and family. I love the way House creates a protagonist and plot that makes an argument for allowing questions rather than answers to shape a person’s faith and living.

I read this book for my own book research but it ended up being one of my favorite books of the decade. Jauhar tells a brief and accessible history of the modern developments in heart surgery–from closing holes in the heart, to the heart and lung bypass machine to the pacemaker.  Peppered in Jauhar includes his own development as a doctor, which grounds the science in the stakes of practicing excellent medicine.

Catch and Kill: Spies, Lies and a Conspiracy to Protect Predators by Rowan Farrow (2019)

One of two books on the breaking of the #MeToo movement, this follows the story of Farrow’s reporting on Harvey Wienstien, NBC, Matt Laurer and the massive and elaborate cover up of men who abuse women. You really can’t talk about the last decade without talking about this movement and its impact on every industry. There were lots of applicable lessons for the church and you can read them here.

The Lightest Object in the Universe by Kimi Eisele (2019)

This book could easily be overlooked for its simplicity, but I loved the way Eisele tells the story of the end of the world as one filled with hope, imagination and relationship. There is a vision for who humans could be in the apocalypse that challenge readers to live into that vision now. I loved this book enough I wrote a full review you can read here.

The Dearly Beloved follows James and Nan and Charles and Lily, over their decades in ministry and friendship. Neither sentimental or cynical, Wall tells a thoughtful story about ministry, marriage and friendship with lyrical prose and thoughtful observation about the complexities and nuances of shared life.

One of the things I noticed pulling this list together is that 2016 and 2017 produced some of the most powerful and influential books I read this decade. I didn’t read any more or less that year than I usually do, but for some reason those years produced impactful reads. I am so curious–what made your list? What should I read that I didn’t get to this decade? Let me know!