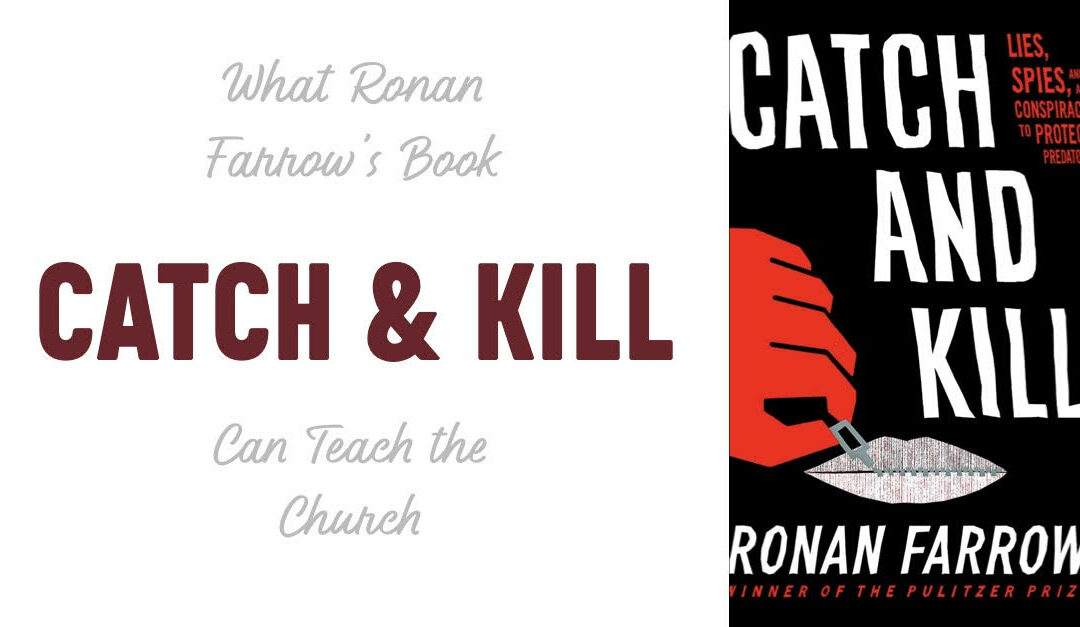 When journalist Ronan Farrow’s newest book Catch and Kill: Lies, Spies and a Conspiracy to Protect Predators released last week I read the entire thing in 36 hours. Since I haven’t done that since the luxurious days of middle school, that alone should say something about the quality of the book and the engagement with the material on which Farrow reports. While the subject matter is brutal as it outlines the way institutions perpetuated sexual abuse and assault specifically Harvey Weinstein, Matt Lauer and various NBCUniversal executives, Farrow approaches the subject matter with journalistic integrity and a straight forward attention to detail and reporting.

There were several moments in Farrow’s reporting of the behaviors of Harvey Wienstien, his associates and at NBCUniversal that he takes time to make connections around the structures of power that led to such terrible abuses. I found many of them easily translatable to the church as an institution and in local practice.

When the story around Harvey Wienstien is about the release, the board of the Weinstein Company met to address the problem. There are reports that it was heated, but in the end the board voted to continue his tenure. Farrow points out one specific practice that created a board without the strength to address these troubling allegations, specifically board structure. Harvey and his brother Bob were able to hold two spots on the board, there were several seats on the board that they could choose who filled them and the rest of the seats slowly over time were filled with other HW sympathizers. What it led to were enough people that been associated with or had benefited from Weinstien’s power that they were unable to hold him accountable.

This is interesting when we think in the church about long term pastorates and how the leadership positions of the church are filled. Most churches allow senior leadership either formal or informal influence over board nomination. Over time this can create a monoculture of thought and accountability. This practice alone may not lead to a senior leader that abuses power. Instead it can often be used to protect the staff that the senior leader hires and the overall culture. Maintaining a diverse board is also important if we are not in a long term leadership position–the structures we build will be inherited in all their health and dysfunction by another pastoral team one day.

Another thread throughout Farrow’s accounting is the role that secrecy culture played in creating cultures of abuse. Often secrets were upheld under the guise of confidentiality, leaving processes of reporting, investigation and follow up muddled and unclear. Many of his accounts of complaints within NBC Today Show were handled in such a manner. This lack of clarity was intensional and served to make women who reported abuses feel unsure and threatened. Another symptom of secrecy culture was a pattern of passing the buck. When Farrow was drawing close to publishing his story with NBC executives played a game of round robin with responsiblity saying “the higher ups say” or “legal says” or “the people below me say,” while no one took direct responsibility for decision making. With no clear and transparent process executives were able to shirk responsibility and distribute blame.

It should also be said that silencing happens subtly–and that’s what makes it so effective. We tell female employees “I am sure it didn’t happen that way.” Or “I’ve known so and so for years and they are not like that.” Or “can’t you just let it go?” These are all tactics that create circles of silence.

In church culture we deal with lots of highly confidential information, but there is a difference between maintaining professional confidentiality and creating a culture that lacks transparency and accountability, incubating secrecy. Every church should have a safe church policy and practices in place, updating them annually to reflect changes in best practices in this evolving landscape. Aside from safe church policies and procedures, it builds a healthier organization when how decisions are made and who makes them is clear. As Brene Brown says “clarity is kindness.” Clarity also creates safer spaces for people to encounter God and trust that when they have been harmed that their harm was not at the hands of or perpetuated by God’s presence made known in Christian community.

There were several instances in Farrow’s reporting where women were scared to come forward, often fearing retaliation or the loss of their careers. However, Farrow also talked about how many victims were encouraged to tell no one, often by close confidants, friends and mentors. These circles of silence created shame for women who experience sexual abuse and assault but it also created space for bad behavior to continue. What works about circles of silence is that they are informal and relationship based. Our relationships, put theologically our incarnational connections of the Spirit, are powerful tools that build strength and can also encourage silence.

In the church we cannot create circles of silence that like cell phone service create dead zones where the telos of the Gospel is not the driving principle, where stories cannot be heard and honored.

When you try to talk to pastors about power they generally handle it like a dirty gym sock. They pinch their nose and hold it at arms length, while completely ignoring that the sock got stinky and sweaty because they wore it to play the game. Personal and organizational denial of power is at least lazy and at most dangerous. If we lead organization where people gather, we have implicit and explicit power. Power denied or minimized is power not managed with intention and thoughtfulness.

Instead of denying or minimizing our power as religious leaders we should be thoughtfully interrogating that power, asking questions like…Who holds explicit power in this organization and how does that differ from whom hold implicit power? How do I function in the current power dynamics and what can I do to use that power with wisdom? Who does the process protect? How does the process prevent future abuses of power?

Working with church staff and overseeing Christian Education for sixteen years I firmly believe that one of the most important things we can do as pastors and church leaders is to create a safe space for encountering God. Part of that is reckoning with our past and present practices that have left our beloved communities vulnerable to harm. We often erred on the side of protecting the privacy of people who were accused of misconduct rather than protect the spiritual formation of those who were harmed in our midst. Those days are quickly and thankfully coming to an end. Whether we like it or not, this is part of the healing work of Christ in our day–that we might confess, repent and care for our people better than we did in the past, creating spaces where people can heal.